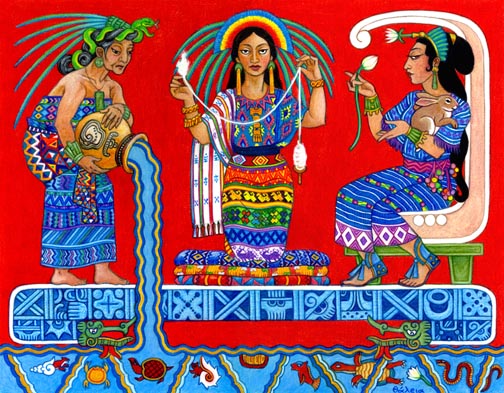 Ix Chel is the Maya goddess of the moon, healing, women’s sexuality, fertility, and midwifery. She protects women during their menstrual cycles, pregnancy, and labour. Ix Chel is shown as maiden, mother, and crone (wise woman), symbolizing the three phases on the journey of womanhood. As a maiden, she is shown with a rabbit, a symbol of fertility and abundance. The Mayans also associated the moon with rabbits as the rabbit is considered to be the scribe of the moon calendar. Ix Chel as a mother goddess is a weaver who set the universe into motion. As a crone, she is known as the midwife of creation, and seen with a serpent, which symbolizes regeneration, and change of seasons.